https://www.pscp.tv/w/1yNGaXVzLNbKj
Here's a dynamic black man defending a Confederate monument.
American patriot H.K. Edgerton stood beside the destroyed remnants of the “Silent Sam” Confederate statue in Chapel Hill, North Carolina Wednesday with a Confederate flag to protest the destruction of Southern American history.
Edgerton, the former Asheville, N.C. chapter president of the NAACP, delivered an eloquent defense of the statue, which was torn down in an Antifa riot in which the University of North Carolina was clearly complicit. Edgerton explained how the Confederate military was integrated and spoke of the numerous black heroes who fought and gave their lives at war — black heroes who used to be honored by Silent Sam, but are honored no longer due to Antifa’s criminal actions.

Watch this brave man’s history lesson, which UNC students could learn something from: 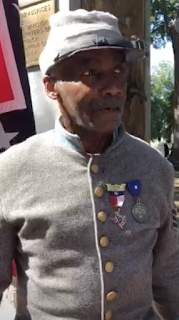 Posted by Esther at 6:40 AM No comments: