Dave was born July 17, 1917 in Sunnyside, Utah, to Max and Aurelia Seppi, the only son after three daughters. He was only three pounds at birth and not knowing if he would live, his parents named him Dave with no middle name. Dave grew up in the mining camps where his father, Max, worked. Dave was the only one of his family to finish high school. His sisters left school to earn money for the family while their father was sick with (miners) Black Lung.
Around age 13, Dave Seppi, began working at Labouri’s service station, in Helper UT, where he learned mechanics. During a trip to California he got a job at a service station, later, as crane operator for American Forge Co.,
He met Betty Hagerty, a young nurse from South Dakota, in Oakland. They were married September 1, 1946.
Dave drove a commuter bus for Key Systems till he was drafted into the army. He was chosen as a cook at Beal Air Force Base in Marysville. After the war, Dave tested for the California Highway Patrol while driving for Key Systems. Dave and Betty’s first baby, David Robert, was born in 1947 in Berkeley, The Seppi family moved to Bakersfield California where Dave patrolled the grapevine. In Bakersfield the Seppi’s were blessed with Lance Richard, 1950, John Leonard 1951, and Mary Jane 1952. Dave was promoted in the CHP to Sgt. and moved the family to Sacramento. When promoted to Lieutenant, he moved to Jackson CA, where he helped build their home where he lived until Christmas Day 2005. After retiring, Dave served 16 years on the irrigation board for Amador County.
Dave was known for his warm greetings, Italian cooking, art, woodcarvings, gardening, golfing, hunting, fishing, woodworking.
https://melodys-notes.blogspot.com/…/dave-seppi-1917-2006.h…
Son of an Austrian immigrant coal miner... 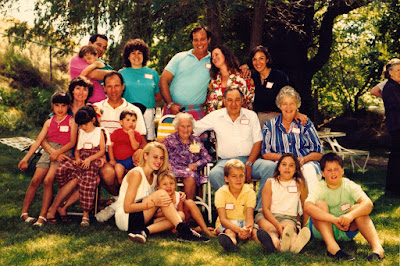 Posted by Esther at 5:48 PM No comments:

The Benefit Of Eating Seeds, What The Studies Show with Joel Fuhrman M.D.

Posted by Esther at 8:34 AM No comments: