Dear Grandma,
95 ½ years ago, your mother gave birth to her 15th child and 11th daughter. She gave you her name.

You were one of the “four least ones,” and grew up working on your New Mexico mountain farm.

Your dad left when you were five and when you saw him walking away you ran after him, asking, “Papa, where are you going?”  He scolded you sent you back home.  After that, you thought that everything would be all right if your daddy would just come back home.

You walked to a one room school house, met Indians who walked into your house expecting a meal, rode 14 miles in a covered wagon to church every week and worked and played with your sisters who were your lifelong friends.

When you were just seven, you went to live in Bacca Canyon, with Inice, your cousin, to give them enough students to keep the school open.  Inice only brought crackers and peanut butter or cheese for lunch and you were hungry.  Three brothers brought beautiful bun sandwiches to school every day.  One day you asked to go to the bathroom and stole one boy’s sandwich.  He was upset at lunch time;  and you were miserable.

Back at home, you were so happy to see your sister, Fama, again that you jumped on the bed rejoicing together. Your mom spanked you, then told your Uncle Daniel. That humiliation hurt worse than the spanking.

You practiced your spelling words down rows while picking cotton. And witnessed FDR’s destructive reformers slaughter the neighbor’s cattle and left them to rot, in order to bring meat prices up.

When you were 16, Fred Wells, an evangelist came to town, he stayed with your family.

You had gone to the alter several times and thought you were a Christian, but now felt so guilty.  The memory of the little boy's bun sandwich, back in Bacca Canyon, and his dismay that his lunch was gone still weighed on your conscience. God showed you that being good was not enough, that your heart was  sinful.  Your mother wanted all of you at the table at the same time.  You were under conviction, and didn't want to eat.  Mr. Wells offered to take the Baileys to Carrizozo.  One of the sisters needed to see the Dr.  You pleaded not to go.  You were so afraid you would die and be lost forever before you had the chance to go the altar. But Mr. Wells insisted. That evening, you asked the Lord to forgive you, and thought you must be the happiest person in the whole world.  He wonderfully saved you.  For days you went around singing:

Oh the joy of sin forgiven!
Oh the bliss the blood-washed know,
Oh the peace a-kin to Heaven,
Where the healing waters flow.

Picking cotton every year left you behind in school. One year you worked from September till February. Then back home you had to ride the bus to school in the next town. Many of the students were not Christians and you thought the things they talked about were terribly wicked. You read a magazine ad for Holiness Evangelistic Institute in El Monte, CA, and told your mother about it.  When your older sister Lillie visited from CA, your mother talked to Lillie about the school in the morning. That afternoon, you said goodbye to your grandmother, packed and left for California with 90 cents in your pocket. Your mom gave you 80 cents she had just earned selling eggs. And your sister, Madge, gave you a dime.

You loved Bible school and worked for Mrs. Heg, an elderly, particular woman, for school money, and married Grandpa, one of the Bible school teachers from Illinois. 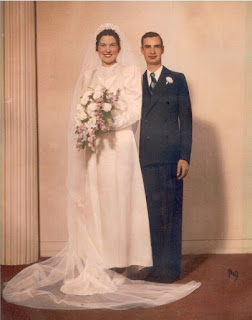 War brought shortages and you were thankful for Grandpa to get a war time factory job building airplanes, instead of being a soldier.

Your first baby was born cesarean. You named her Fama, after your closest sister.

Popular psychology advised that spankings were not good for children, but you remembered your mother and the Bible and decided you would go with the Bible.

Your early marriage was full of job moves, new babies, and caring for a very germ conscious mother-in-law who you did not know had Tuberculosis  in Illinois.

Back in California, you and Grandpa borrowed from your brother-in-law, Arnold Seeger, for a down payment for your house and property where you lived for fifty years.

After your youngest was born you nearly died from blood loss, and stayed in the hospital for weeks. You asked God to spare you for Steve’s sake. We think He spared you for us too.

You worked cleaning the church while Grandpa was gone all week when he engineered the county roads in the National Park.

All the family gathered at 6 am for devotions each morning to read the Bible before school and work.

You urged all your children to get their driver’s licenses as soon as they could, not wanting them to be in your shoes.

You cautioned Mom with every young man she brought home, telling her, “I don’t think he is the one,” until it was Dad. Then you were pleased.

You welcomed us into your home with the big yard and telephone poll swing set and old cow pasture gardens. At meals you delighted in the food from your own land.

When my siblings were born, we got to stay with you and then drive to the hospital in the night to see the new baby come. We watched with excitement while you prayed for Mom.

Because of God’s work in you, 66 of us have life and many more will look to you as grandparents.

I thank God for every year He gave us with you.

Thank you for praying for all your descendants and for training your children to obey you and the LORD. That is the greatest gift you could give us.

Thank you for encouraging me to hope in God when we came to see you in the hospital.  You were recovering from a pricked lung when getting your pace maker replaced and I had just been through a break-up.  You told me you were sure God had someone for me and that I might marry a man with a child, when I could not see how He would work. 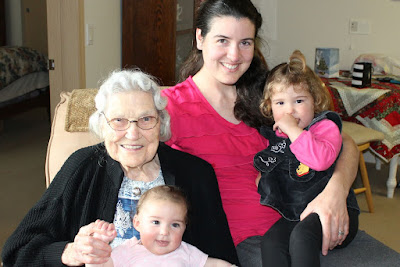 I love you, Grandma!
Psalm 103:17-19
But the mercy of the Lord is from everlasting to everlasting
On those who fear Him, and His righteousness to children’s children,
To such as keep His covenant and remember His commandments to do them.

Email ThisBlogThis!Share to TwitterShare to FacebookShare to Pinterest
Labels: Family 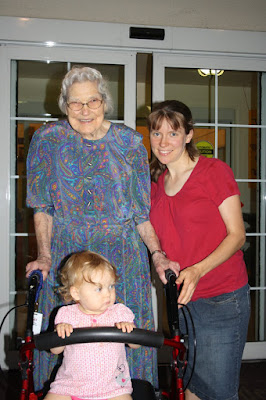 I think this may be the last picture we took of Mother. Dinah is in the photo above with her daughter, "Tia." Mother passed into eternity to be with God at 95 ½ years. We thank God for each day He gave her to live. Mother lived for God and loved her family and the people around her.
Her favorite Psalm was 103. We love it and love to sing it too. 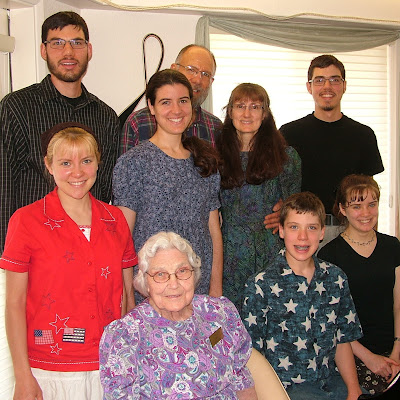 Dad and Mother raised seven children in the Lord. They were faithful in their Mon. -Sat. 6-7AM daily family devotions to the Lord. Mother was our church janitor. We all joined her on Saturday to finish the job. She saw it as something she did for the Lord. I knew her input in us was much more valuable than all her other work. 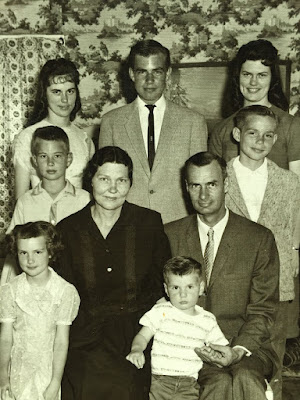 Mother washed clothes then put them through a ringer. I prayed that those old ringer washers would be extinct before I grew up. My sweet little brother got his arm caught in the ringer when he was four years old. We were away at school. Mother heard Sam screaming, then when he stopped to catch his breath, she thought for a moment that he was fine. Amazingly, Sam had no long-term problem with his arm. I prayed those wringer-washers would be extinct before I grew up.

We had a milk cow, which was usually good when mother was milking her, but once when mother was moving her to another pasture, I saw old Gurnsey break into a run. Mother was holding on to the chain and dragging on the ground behind the run-away cow. [Our brothers had their time to milk her as well.]

I took milk to neighbors who gave us 30 cents per gallon. Mother was faithful to visit all the neighbors surrounding us, and prayed with some at the end of their lives to receive Christ. I pray God had mercy on them. 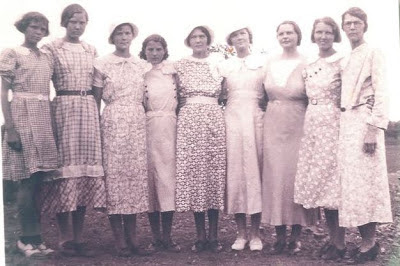 Mary was born in Alto, New Mexico to James and Mary Bailey, the 15th of their 16 children. She was raised on the family farm and after her parents' divorce when she was very young, she picked cotton along with her siblings to help provide for her family.

At age 16, Mary moved to El Monte, CA to attend Holiness Evangelistic Institute Bible School, where she met one of the professors, Darwin Norval Stoops. They married on February 21, 1942. Norval and Mary were blessed with seven children, 29 grandchildren and a growing number of great-great grandchildren. Norval and Mary were dedicated members of Visalia Nazarene Church for over 60 years. 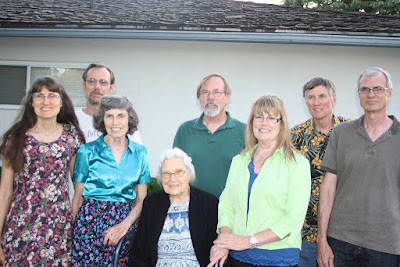 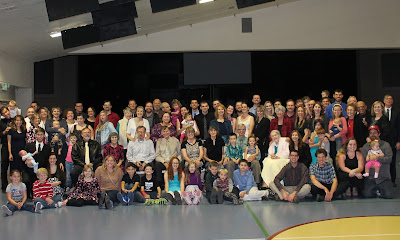 Email ThisBlogThis!Share to TwitterShare to FacebookShare to Pinterest
Labels: health

Email ThisBlogThis!Share to TwitterShare to FacebookShare to Pinterest
Labels: diet

Impelled calf of leg on pencil, this was my favorite remedy:
Rinse for 5 + minutes under cool water.
Clean with peroxide...fill the stab part with turmeric and...cover with a soft gauze bandage. ~Es
http://www.home-remedies-for-you.com/askquestion/7475/treatment-from-pencil-stab-what-do-you-do-when-you.html

I was lying in bed, chatting on phone when my leg came down on an upright pencil that I had been using to underline favorite parts of a book.
Posted by Esther at 1:02 AM No comments: