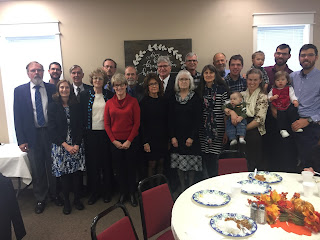 Gathering with Cousins
Letters from George's three daughters (center in photo) and his one biological grandson were the best part of the memorial service.
I remember Uncle George most for his delightful humor, sensitivity, prayers, singing with gusto and his stories.

George was born on April 26, 1922 to Matie (Jones) and Clifford Stoops at Viola, Wisconsin. He was the youngest of three brothers (Marion, Westley, and Norval), and one sister, Pauline. Brother Marion drowned at 17, and sister Pauline died at 19. His father passed away at 43 years old, so his mother was left to raise the 3 remaining boys, Westley, Norval and George. Matie moved the family to Nampa, Idaho in 1936 where George first attended junior high school in Nampa, then graduated from Nampa High School in 1941. After graduation, he attended Northwest Nazarene College for two years where he met and married Betty Jane Dillon on June 28, 1943. George worked on a dairy farm for a brief time and also received schooling in welding and meat cutting. He was inducted into the U.S. Navy in 1943 but transferred into the army in 1944 and ultimately was stationed with company F 383rd infantry on the island of Okinawa. Not long after arriving on the island, George was severely wounded in direct combat by a hand grenade but miraculously survived his wounds and was later awarded the Purple Heart and the Bronze Star. He was honorably discharged in April of 1946 at Fort Lewis, Washington, Madison Hospital Center. George started working for the Idaho Department of Employment soon after his discharge from the service and worked for the state for 34 years before retiring. During those years with the state, he worked for the employment office in Nampa and was responsible for placing many local individuals into their lifetime jobs, as well as many teenagers with summer jobs. George's later years were spent in the Boise office. In addition to placement of individuals in various jobs he served as secretary to governor's committee on hiring the handicapped. Part of his duties were to oversee statewide contests in the schools where students would compete by drawing posters or writing essays, all promoting the theme of hiring the handicapped. When the contests were concluded, he would travel to Washington, D.C. with the student winners. George was also instrumental in the passage of a bill to designate handicapped parking spaces, not knowing that one day in the future, one of his own daughters would benefit from this law.

George was a member of Bethel Nazarene Church & taught Sunday School for more than 30 years. As a younger man, he was also a youth leader. Music was always important to George. He loved to sing with several quartets and also as a soloist and did so, often in church, as well as other special occasions.

George is survived by 3 daughters; Judy Rice of Caldwell; Connie (Terry) Rogers; and Georganna (Jim) Bower of Nampa; a sister-in-law, JoAnn (Roger) Wilcox of Nampa; 8 grandchildren; 10 great-grandchildren and a number of nieces and nephews. He was preceded in death by his wife, Betty of 73 years; 3 brothers, Westley, Norval and Marion; a sister, Pauline and an unnamed baby sister.
Posted by Esther at 4:39 PM No comments:

City on a Hill

Matthew 5:14 You are the light of the world. A city that is set on a hill cannot be hidden. 15 Nor do they light a lamp and put it under a basket, but on a lampstand, and it gives light to all who are in the house. 16 Let your light so shine before men, that they may see your good works and glorify your Father in heaven. 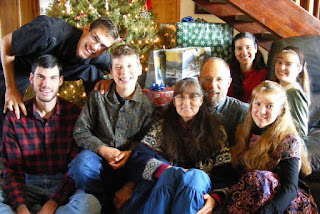 Posted by Melody at 7:23 AM No comments:

Email ThisBlogThis!Share to TwitterShare to FacebookShare to Pinterest
Labels: Christmas

A Mighty Fortress Is Our God

Here is today's sermon on Psalm 46. As we get closer to the 500th anniversary of the beginning of the Reformation, we look back at the Psalm that inspired Martin Luther's famous hymn, "A Mighty Fortress is our God."
"The LORD of hosts is with us;
the God of Jacob is our fortress."
(Psalm 46:11)
#reformation500 #lordsday

~Peter
Posted by Esther at 8:28 AM No comments: 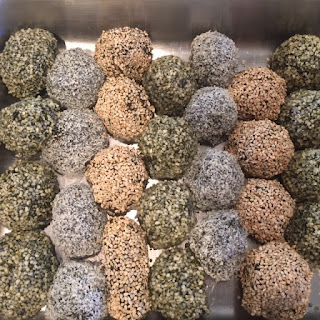 Stir in the liquid ingredients.
Form into balls and roll in one of these:
Unsweetened Desiccated Coconut
Sesame Seeds, Hempseed

You may want to wear thin gloves to roll into small balls because it is messy.  [I use the melon scoop from BB&B.] Place in sandwich bags and hide in the freezer. Keep just one bag in the refrigerator at a time. Sometimes you can get them to last a bit if the men aren't aware how much is stashed away. :)
A bag left in the van for a week will go bad and taste terrible. They need refrigeration.

To make measuring spices simple, I keep a small jar of about 6 T each of cinnamon, nutmeg, coriander and 2 T each of allspice, mace, cloves.  With this mixture done ahead, just use ¼ c of the spice mixture for this recipe. These spices are an excellent source of antioxidants to sprinkle on breakfast oatmeal. 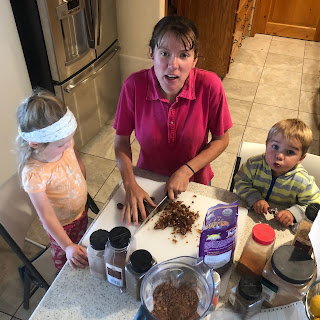 Fun To Make with Mama
Posted by Esther at 9:37 AM No comments:

Birth of a Nation in 5 Minutes


The Uncivil War was a Marxist revolution,
that pit the races against each other.
We did not need a war to end slavery.
"Reconstruction" was a nightmare.
Posted by Esther at 12:20 PM 1 comment:

The War That Haunts America


There were northerners who systematically burned homes of fellow northerners. Lincoln's attorney general, Edward Bates, confiscated millions of acres of land of northerners who were considered sympathetic with the South, known as Copperheads. Lincoln imprisoned tens of thousands of northerners without a trial, denying them habeas corpus, keeping people who were opposed to Lincoln's war, in prison for the duration of the war. Lincoln destroyed 300 newspaper offices, censored fee speech, put the editors in prison, conciliated the power in Washington. He is the father of the modern centralized totalitarian leviathan state, nanny of all, but friend of none.

A good picture of the South during the war is burned down houses with only chimneys standing, burned and cut down trees, gardens and wells destroyed, graves with starving mourners...
One could go a hundred miles through the South and see no one smiling.

The north, too, was under martial law, just like the south.


Unitarians hated slavery because it was a picture of God and his people. We are either slaves of God or slaves of Satan. It was the northerners that brought slaves here with a loss of 10%. There's the holocaust. No Southern ship brought slaves. Lincoln freed only slaves in territories he had no authority over. No slaves were freed by the Emancipation Proclamation in the north nor in DC where a weekly slave auction continued under the US capitol, behind the Decatur Hotel, which continued to auction slaves through the duration of the war. The proclamation did not free slaves in certain counties of Tennessee and Florida where northerners had control. It only applied to succeeded states in order to promote insurrection.

Posted by Esther at 9:42 AM No comments: 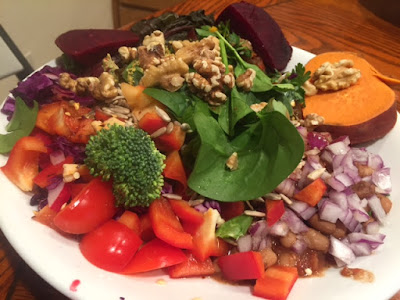 Carrots, celery and eggplant cooked with basil and many of the same ingredients as beans.
Usual toppings: basaltic vinegar, natural apple cider vinegar (made with the 'mother'), sunflower seeds, turmeric, nutritional yeast and crushed red pepper.

Sometimes Served over quinoa, amaranth, millet or rice.
Posted by Esther at 9:35 PM No comments: