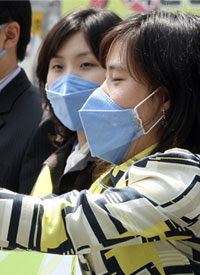 I can’t remember if it was Henny Penny or Chicken Little, nor do I recall what landed on said fowl’s head, either a leaf or an acorn, but I do remember that there was an ensuing panic as the hen in question ran around the barnyard yelling, “The sky is falling! The sky is falling!”

Following the news of the “swine flu” since April, one gets the feeling that that old mantra, “The sky is falling,” is back. While the swine flu scare is the latest in a string of panics about possible pandemics, (think West Nile, SARS, the Bird Flu, etc.), none have been hyped with such consistency and ferocity. Perusing Google News almost daily, I have yet to see a day when they didn’t have swine flu as a front page story. The story broke in April and the reports from Mexico were frightening — some media outlets reported hundreds dead, many others reported scores dead “with possibly many more.” By the time the first U.S. death occurred (a Mexican girl who had been brought to the United States for treatment), the WHO was reporting only six deaths, with the little girl being number seven. While every death is a tragedy, it didn’t take a rocket scientist to see that this flu was being hyped up.

Email ThisBlogThis!Share to TwitterShare to FacebookShare to Pinterest
Labels: news, The New American