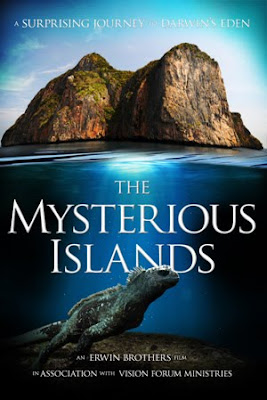 A recently released documentary challenges Charles Darwin on “Ground Zero” of evolution: the . Led by Vision Forum founder Doug Phillips, the expedition covers the territory and animals visited and studied nearly 200 years ago, but comes to a very different conclusion.

Majestically filmed by award-winning Jon and Andy Erwin of Erwin Brothers Motion Pictures, the 90-minute documentary is told through the eyes of 16-year old Joshua Phillips, exploring with his father the world Charles Darwin wrote about.

The Mysterious Islands feature a lavish display of exotic animals in their native habitat including 150-year-old tortoises, flightless Cormorants, Blue Footed Boobies, and an albino whale shark, all seemingly without a normal fear of man. The tour guide related that he hadn’t seen such a rich display of animal life in 25 years.

The Galapagos Islands are the most incredible living museum of evolutionary changes, with a huge variety of exotic species (birds, land and sea animals, plants) and landscapes not seen anywhere else.