Saint Patrick had a holy passion for serving God and reaching the lost. Around 461 AD, St. Patrick died. As a teenager, the Roman Legions guarding his community in Britain were withdrawn to defend Rome from invading tribes such as the Huns. Unprotected, Britain was attacked by raiders, who carried away thousands. Patrick was captured and sold as a slave in Ireland, which was ruled by the Druids, who practiced human sacrifice. For six years Patrick herded animals until he escaped. In his forties he had a dream calling him back to Ireland. In his Confession, Patrick wrote: "In the depth of the night, I saw a man named Victoricus coming as if from Ireland, with innumerable letters, and he gave me one and while I was reading I thought I heard the voice of those near the western sea call out: 'Please, holy boy, come and walk among us again.' Their cry pierced my very heart, and I could read no more, and so I awoke." Patrick returned to Ireland, confronted the Druids, converted Chieftains, and used the three-leaf clover to teach the Trinity Baptizing 120,000 and founding 300 churches, he wrote: "Patrick the sinner, an unlearned man to be sure. None should ever say that it was my ignorance that accomplished any small thing, it was the gift of God." 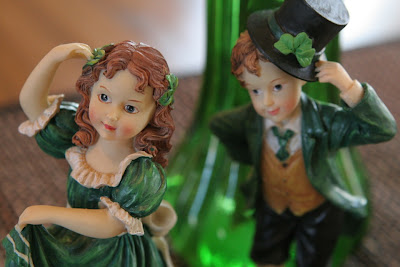 "Health and long life to you, Land without rent to you,

A child every year to you, And death in old Ireland."

God knows what He is doing when He spaces children through nursing. My great-grandmother did not nurse her babies. As a result, she had one about every year and two died from 'milk sickness' their inability to digest cow's milk.
The Irish blessing expresses what the Irish valued before the Potato Famine. It is an impossible blessing. The Irish were under tribute to the English, so they all had 'rent.' Poverty sent many of them overseas in search of work. In spite of this they loved children and thank God, many of us are Irish – and have life because of it.